PLANET ENW-9720P is a 2-port 10/100/1000T 802.3at PoE+ PCI Express server adapter with a maximum of up to 60 watts of power output over Ethernet cables. Incorporated with Intel server-grade GbE Mac controller, the ENW-9720P provides superb performance to fulfill the requirements of Industrial networks. Complied with PCIe standard, the ENW-9720P can be easily installed on any IPC or server motherboard with a PCIe socket to make the IPC or server able to communicate with other Ethernet devices and deliver power to PD devices.

Each port of the ENW-9720P can deliver 30W of power and 1000 Mbps bandwidth over a networking cable of up to 100 meters. Its 30W PoE+ can now power not only PTZ (pan, tilt and zoom) cameras for surveillance applications but also 802.11ac AP for ultra-high-speed wireless application.

PLANET ENW-9720P is backward compatible with both IEEE 802.3af/at PoE standards which allow users to flexibly deploy standard and high powered devices to transfer data and power simultaneously through one Ethernet cable for up to 100 meters.  In addition, the ENW-9720P is powered by bus power without an external power input. Thus, an additional electrical outlet is not necessary.

With PoE application, the ENW-9720P frees the IP camera and wireless AP deployment from restrictions of power outlet locations and the additional AC wiring. It reduces cables and eliminates the need for electrical outlets on the wall, ceiling or any unreachable place, and most of all, it reduces installation time.

The ENW-9720P supports IEEE 802.1Q VLAN which allows it to operate in a flexible and secure network environment. With 9.5K jumbo frame ability and IEEE 802.3 flow control support, it further optimizes throughput and wire-speed packet transfer performance without the risk of packet loss. The high data throughput of the device makes it ideal for most Gigabit Ethernet environments.

The ENW-9720P operates completely well with most of the popular and latest operating systems including Microsoft Windows Server, Linux and VMware, enabling simple integration into network designs. There is no need of any modification to the server's operating system or any special software required for the ENW-9720P to be integrated into the system.

PLANET ENW-9720P is designed with Intel® I350AM2 server-grade GbE controller which provides high-performance, dual-port Gigabit network connectivity. It not only supports 9.5K jumbo frame and 802.11q VLAN to enable higher and better throughput of data but also enhances data acceleration across the platform (network, chipset and processor) to reduce CPU utilization. In addition, its single-bus, dual PoE ports capacity delivers up to 30W power per port with a total power budget of 60W.

The ENW-9720P can easily act as a server NICs of your networks by wiring to the backbone switches and is right for the main board with PCI Express now and in the future. The ENW-9720P is a highly cost-effective solution to deliver Power over Ethernet function to meet the requirements of industrial networks that come with IP surveillance, IP phones and WLAN application. 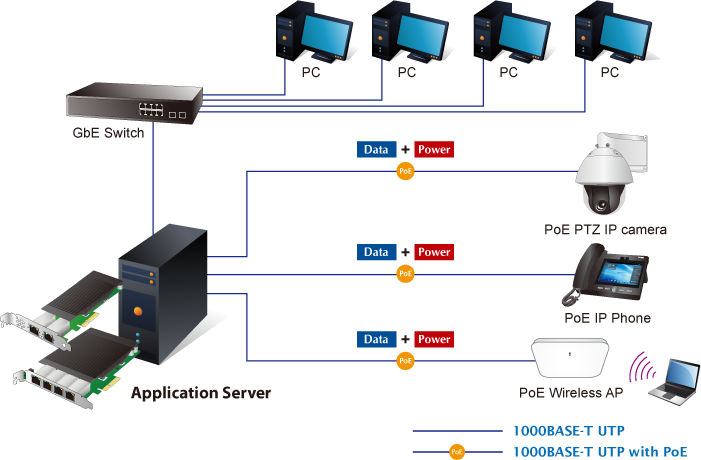