PLANET WDRT-1202AC Wireless Broadband Router supports IEEE 802.11a/b/g/n/ac standard, dual band, and Gigabit LAN and WAN, thus providing the wireless speed of 867Mbps in the 5GHz frequency band and 300Mbps in the 2.4GHz frequency band at the same time, which is 16 times faster than that of the traditional 11g access point. With its outstanding stability of high-speed wireless transmission and enhanced reliability, the WDRT-1202AC can provide users with excellent multimedia streaming through their mobile devices anywhere, anytime in the home and office. 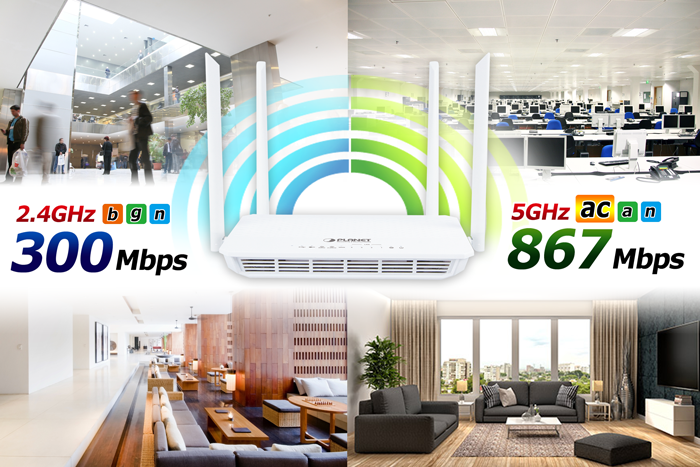 Use of 5GHz Band is Current Trend

Since the 2.4GHz band is now too crowded with users using the high-speed wireless connection for more and more wireless applications, the 5GHz band, currently in great demand, is designed to relieve the situation. In order to avoid the wireless interference between the two bands, PLANET WDRT-1202AC provides users with the radio frequency of 5GHz for watching HD videos or playing online games while the 2.4GHz band is used for surfing the Internet. The WDRT-1202AC is just like 2 totally independent Access Points in one device for you.

Improving communication speed is one of the major requirements of today’s Gigabit local area networks. With throughput up to 10 times faster than the existing 100Mbps solution, the WDRT-1202AC fully employs the full functionality of the 802.11ac wireless standards, eliminating the bottleneck of the transmission speed of the megabit wired type. Using the WDRT-1202AC to connect your desktop, NAS, media player and game console guarantees extremely high throughput and excellent signal quality.

The WDRT-1202AC supports NAT function allowing multiple users to access Internet via a single legal IP.  It also provides Port Forwarding for the specific LAN PC to act as an application server and offer certain service to the clients on the Internet. In addition, the powerful firewall protects your Intranet clients from unauthorized accesses and various kinds of DoS attacks from the Internet. The WDRT-1202AC with MAC-based access control allows or denies wireless client connections to prevent possible hackers attack.

The WDRT-1202AC has a built-in USB port which can be connected to an external USB storage device for file sharing. Moreover, the DLNA (Digital Living Network Alliance) compliant media server feature allows multimedia contents, such as streaming videos, music and photos, to be easily shared among SmartTVs, tablets, mobile phones and laptops on a home network. Thus, all clients on the network can share mass storage through the WDRT-1202AC without complicated network configuration. Via the USB port, it also can output 5V DC power to charge any USB compliant devices.

PLANET WDRT-1202AC delivers dual-band technology to avoid signal interference and ensure the best Wi-Fi performance. It allows you to check e-mails and surf the Internet via the 2.4GHz band and simultaneously watch high-definition (HD) video or any other multimedia application via the 5GHz band. With four external antennas, the WDRT-1202AC can provide users with excellent multimedia streaming and wider coverage through their mobile devices anywhere, anytime. 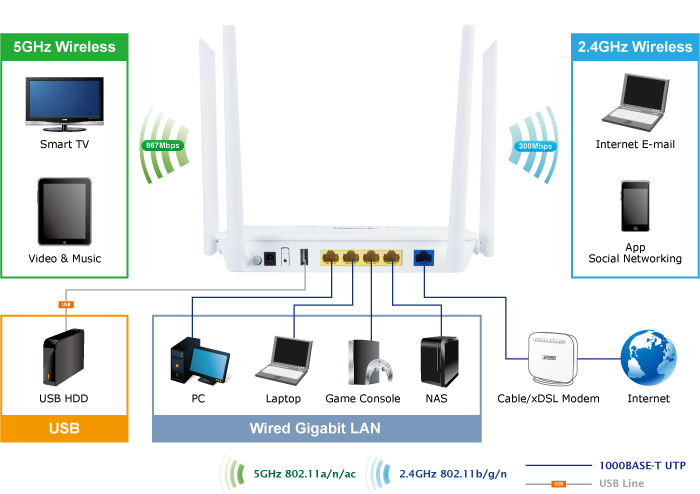 The WDRT-1202AC supports setup wizard when you log in the router for the first time. With the built-in Quick Setup function, users can configure the WDRT-1202AC quickly through a couple of simple steps. The WDRT-1202AC definitely provides a total network solution for the home and SOHO users.